If you are like me, you depend on social media for a fair amount of social interaction and eavesdropping. The average social media user has no clue how important this is to the disabled/chronically ill community.

With all the upheaval at Twitter, I’ve been thinking about adding new accounts such as Mastodon so I dug in over the weekend. And oof. It’s not for the faint at heart. So far I’ve actually had more interaction there than I get on my twitter account but I can’t tell who those folks are. Bots? Weirdos? Normal but shy folks? 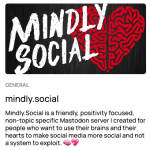 I chose a server because it seemed rather general. mindly.social

Rather innocuous but I didn’t want a silo. I do set up my Facebook account that way – only choosing to interact / follow with folks that don’t irritate me. Yup, my own little echo chamber.

But my twitter account is so varied that there’s simply no way to manage mastodon without a ton of servers – yes, which you can do. But dang folks, it’s really way too complicated. My Twitter peeps are authors, reporters, political, Charlottesville, Maine, Georgia, Bangor Daily News, technology oriented, disability/EDS, funny, sweet, and one specific other person out west who I actually only connected with thru Twitter. In other words, my only new friend.

The good news is that I simply am not a power Twitter user. I don’t have folks messaging me, I don’t have trolls popping up saying nasty things. In general most just ignore me. So leaving twitter is about leaving sources, news and some majorly funny stuff (George Conway is a constant source of puns, humor and weirdness beyond his rants against Trump etc).

Oh, you know that inflatable duck that keeps appearing shore side here in Maine?  Join @JoyDuckME for snaps and a bit of joy. I’m only following 295 accounts and have 368 followers who I usually never hear from. Not much, just enough to keep me there until the platform implodes – which I am expecting.

Mastodon may be no substitute for me.

I have seen several twitter users in the disability community complain that it is where they connect and share info and can’t live without it. My experience has been way better in Facebook groups – it’s worth joining Facebook for them. The largest, most active groups I’ve found anywhere for Mast Cell Activation Syndrome and Myasthenia Gravis are there. There are multiple groups for EDS – including one I started for EDSers who have ostomies. I have yet to find any community on Twitter.

But I’ve already made one friend on Mastodon –  a 51 year old just diagnosed with EDS in the UK. It’s a start.

If you have found your peeps on Twitter, an implosion can be a disaster. Stop worrying – start looking. I know how hard it can be to make changes (my brain fog has subsided since starting IVIG so I can deal with this now) but don’t wait until you are forced into it to reduce your stress level over this.

Can You See Me Now?

It’s Never Over But Hope Remains