It’s really tempting to do the Ding Dong, the Witch is dead bit here. But I’m simply not that angry.

Honoring your parents is a choice just as emotional and physical abuse is also a choice. My emotions are mixed but I’m left with sadness because she never apologized, almost never told me she loved me and criticized me until the end of our relationship.

I haven’t spoken to her in about 8 years and it was the best decision I ever made. Sometimes you have to limit the ability of your family (and friends) to hurt you. 8 years ago she did it again and my reaction was just a WOW. How nasty! And I realized it didn’t hurt. I was over her. Wasn’t I?

Such a death can bring feelings of relief, vindication, and anger. And then there’s sorrow. 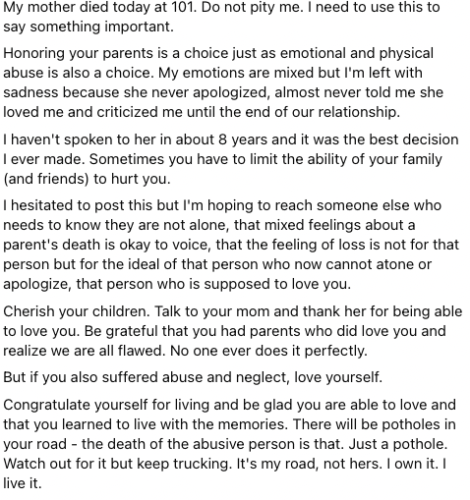 It was not enough. Yes, I said what was necessary for that venue, but there’s so much more to be said.

So digging back in:

I cry for myself – that young child whose worst abuse was traumatizing enough that she has blanked it out, for that teen who blamed the issues at home at her dad’s drinking without knowing the whole story, for that young adult who learned how dangerous it was to confide in her mother, for that young mother who found out about that old abuse as she faced her own difficulties with her son, for that adult, now 71 years old, who kept trying to get love and approval from her mother until 8 years ago.

I cry for the loss of what never was, a mother capable of love.

You never get over that. Some handle it better than others. I’m a survivor – an emotionally scarred survivor. My life has been formed by that lack of love.  I have never “overcome” it. Each decade that passes gives more insight.

And now she’s gone. I wondered how I would feel. Now I know. At first it was a shift in the universe. Losing a parent? Don’t actually know. It was weird.

Then anger as I suddenly started seeing bad memories. Then quickly after that, tears, that sorrow.

I dug into research and found virtually nothing written about this topic. I spent the next 24 hours thinking about writing more, researching more. The next day I found this webpage entitled Why People Feel Grief at the Loss of an Abusive Spouse or Parent. I left the page open after skimming it and decided to come back later to this post.

Am I over her death? I would venture yes. Am I over her? No, I will never be “over” her but I am okay now. I don’t have that milestone looming over me. I now know what’s it’s like to have her gone. I’m left with one thought. Why in the world was she allowed to stick around so long? Why did my daddy die 30 plus years ago? Oh, well. Life goes on.

The Twilight of Diagnosis