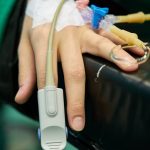 Most everyone in the Ehlers-Danlos community has a story to tell about their medical PTSD. Watching the stories on the Facebook group for Myasthenia Gravis, I’ve realized it’s a rare disease phenomenon, not just us Zebras.

If you’ve not experienced the kind of problems I’m talking about, count your self extremely fortunate. My husband with his 17 years of Rheumatoid Arthritis is constantly taken aback by these kinds of stories. No doctor has ever told him his problems were in his head.

But as a woman, I ran into this the first time at age 15. I caught cat scratch fever, a bacterial infection that doctors didn’t treat. I believe in 1966 they thought it was viral, not bacterial. The practice was to simply monitor the patient. One of the most prominent symptoms can be swollen lymph nodes – not nodes that one can palpate and feel the swelling but enormous visible nodules. I was fortunate that only one of mine was so affected – on the inside of the elbow. I remember to this day the pain from accidentally brushing my arm against my side. When it returned to normal, my doctor said the infection has passed and I was declared normal once again. I replied, no, I’m not.

I still had fatigue – still a lack of energy. It could have been worse as it never hit full chronic fatigue territory. The doctor, however, said it was all in my head and my parents sent me to a psychiatrist. After 30 minutes he deemed me sane but told my parents afterwards that they had major family problems. (alcoholism being a large part of that). Mother got really angry and I never saw that man again!

About 2 years later, my menstrual cramps got to the point where all I could do was lie in bed for at least 24 hours every month. Off to the ob-gyn! Who told me the cramps were all in my head.

You see, you don’t need a rare diagnosis to get this kind of medical response. I’m pretty sure women run into it earlier and easier than men, partially due to gender attitudes but also due to the fact we women get immersed in continual medical care earlier due to owning  those parts where cancer can strike early.

Unfortunately, it turns out that my fatigue at 15 may well have been sleep apnea, triggered by the cat scratch fever. I learned to contend with it and just coped – pushing through it because I was a high achiever. When I finally got a cpap machine in my late 50s, I could not believe the difference in my energy levels.

These are small tales, small signs of worse to come though. Trying to get my myriad small problems diagnosed and resolved led to decades of occasionally cooperating doctors who would look into things, perform tests and pronounce me normal. Thank heavens my issues were not too debilitating. I just learned to cope.

My diagnosis of EDS at 55 was the end result and the start of the worse of my issues. The rheumatologist who diagnosed me told me EDS was genetic and uncureable and just go home and forget about it.

I was also diagnosed with fibromyalgia by a pain doc who grabbed me in several places to proved I hurt. That diagnosis took 15 minutes. Yay? I had investigated it before then and did not believe I had it. I said at the time that I had a number of different problems and proceed to tackle them as they arose – frequently with surgeries to remove cysts and neuromas, clean out genetically stupid shoulder joints, break adhesions from the aforesaid frozen shoulders and so on. Up til my recent surgical insanity, I had had 15 surgeries as an adult.

At least when my colon finally quit, the gastros quit patting me on the head and sending me home but it was too late. By that time I had full rectal prolapse and a rectocele. Both conditions can be fixed with separate surgeries but neither surgery could fix the colonic inertia. The surgeon recommended an ostomy. It was traumatic to make the decision to let go of the that piece of abnormal normality. My constipation was lifelong but I had gotten to the point I couldn’t leave the house safely. I alternated constipation with diarrhea. My life came to a standstill.

So here begins not just the tale of how I almost died but of what the doctors and hospital did that left me with my medical PTSD. It’s a sordid tale, a condemnation of our entire health system. And no, I’m not exaggerating!  But I also realize how long this blog post already is and I have so much to say about this subject that I will resume the story in a subsequent blog post.

All I Have is a Voice