I certainly had gotten used to being brushed off and ignored by my doctors: I was still hoping for diagnosis and for docs who believed me.

Well, they finally believed me all right. But too late to avoid surgery. I opted for an ostomy. An ostomy for constipation. Wow! And it was the hardest decision I’ve ever made.

The surgery wasn’t bad that January and I was up and learning to cope with an attached appliance but still had pain some months later that made no sense. Back to the surgeon who informs me that he had given me a temporary ostomy, some folks don’t respond well to it and I needed another surgery to make it permanent. What? He never explained any of that before!

So second surgery 6 months after the first in June. He was aware that I had a parastomal hernia and said he would take a stab at fixing it. I knew what he was planning for that would not be effective but I said nothing. Of course, the hernia was not fixed and it continued growing. I went to the surgeon who had fixed my femoral hernia, determined he would be using the most commonly used and effective procedure and scheduled the third surgery for Oct.This time I was told the pain would be much worse than the ostomies. And boy was it! I, the veteran of 16 surgeries, really couldn’t get up and move around much in the hospital. I was literally cursing out loud when required to move around. A little young nurse sat down with me to explain that in not these exact words but what she meant was I was being a big old woman baby and I needed to buck up. Gee thanks, little girl, for your concerned nursing skills. 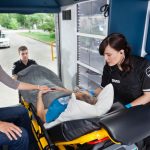 I went home and the pain never decreased. I upped my vicodine dosage. I stayed on pain pills like I never had before. Several weeks later I finally realized something was wrong. Off to the emergency room. They knew I was post-surgery but I waited hours – in fact all of us in the ER waited hours. They didn’t seem to be able to get to hardly anyone. I sat and tried not to moan loudly. A man near me actually asked me if I was okay. (He obviously was seeking a bed for the night, not medical care).

About 8 pm, 5 hours after I had arrived, they pulled everyone in the waiting room into the depths of the ER department. Most went onto gurneys in the hall; I went directly into a room. Eventually got a ct scan. Eventually was told I had fluid in my belly and they needed to operate. I don’t know how long it took them to get further. It’s all a blur but someone came in to check my belly in the wee hours. It was purple. They hurried to get me to surgery. I vividly remember about 5 nurses standing around me outside the OR about 6 a.m., all hopping from foot to foot in anxiety. They were terrified my belly would erupt before the surgeon could arrive. I don’t think he though it was an emergency.  A week in the hospital. Five weeks in rehab. A multi-bacterial infection requiring various antibiotics to no avail before they realized it was more than one bacteria. I received a port for a vancomycin infustion for over a week.

On returning to the surgeon in January for my followup, he proceeded to inform me that I never should have surgery on my belly again because I might die.

No apologies from anyone for anything.

The hernia was not fixed. It kept growing. It got close to the size of a soccer ball and kept growing. Off to University Hospitals in Cleveland to the hernia specialist – the guy who wrote the text on a newer procedure. Great experience comparatively.

But here’s the reality of it all:

The end result for me? Depression. Terror. The thought of another surgery after all that was not doable. I made up my mind to commit suicide instead of letting them “play” with my body again. That’s medical PTSD. Understandably.

Today, over 4 years later,  I can discuss the future surgery. I have accepted that it will happen. I’ve talked to the surgeon at the local hospital and he knows my other surgeons. He is not about to touch me!  Exactly what I wanted because I have chosen a surgeon in Boston. Unfortunately, if I wait long enough, I may have to be life-flighted to Boston. I don’t believe in waiting until things get that dire but I am unable to volunteer for surgery again. I will chance it.

That’s one hospital story. I am not going to talk about all the doctors I’ve seen who have gaslighted me, scoffed at me and even laughed at me. Rare disease and doctor egos are a really bad combination.

That’s my personal story. Next up I’ll be comparing patients with Ehlers-Danlos and those with myasthenia gravis. It’s not just EDS.

The Twilight of Diagnosis