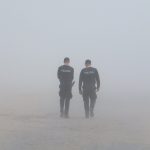 I have my own share of bad cop stories. This phenomenon is not new. My most direct bad cop story is about a friend of mine who drove from Valdosta, GA, to New Orleans in the early 70s. Sheryl was a long-haired hippy about my size; we all were hippies back then at Valdosta State College. As he was driving to Mardi Gras through Alabama, he was stopped by a cop out in a rural area somewhere. He was never charged, just stuck in jail overnight. I do not believe he had broken any laws. He was white – I shudder what might have been the final outcome of that had he had been black. It was discrimination. I also experienced discrimination due our hippie look back then. And we were nearly all white folks.

My husband is a former police officer, police academy instructor and 911 operator. Many of his friends are cops. Many of our students in our martial arts classes were cops. So take this message from a former cop’s view and I’m sure from that of many active duty cops as well.

Our cop stories: 2 decent men, one career long-time cop and one rookie, both our friends and martial arts students. Both got involved in situations 20 years ago that they simply were not prepared for and should not have been involved in. Both resulted in a black man dying. The white career cop was trying to stop a naked berserker who grabbed his gun in the struggle and that poor man died in front of his mother who had called the police for help.

The bi-racial rookie made a mistake, grabbing onto the steering wheel of a suspect’s truck and to save his own life, shot and killed the drug dealer.  Not only were did 2 black men die but the older cop was emotionally destroyed and died of early heart disease a few years later. The equally destroyed rookie cop quit and left town. These deaths hurt everyone but changed nothing.

For all of you “I’m not involved”, “it doesn’t affect me”, “I don’t like the politics”, consider this. Two days ago a black man in Kenosha, Wisconsin, was shot in the back 7 times in front of his children as he was trying to get into his car where the children were. He is paralyzed. It was akin to murder. No question, no matter what proceeded the video action.

In the expected aftermath 2 people were killed last night – a 17 yr old carried an assault weapon across state lines and his to-whom-it-may-concern gunfire killed 2 onlookers while the police were handing out water to the armed vigilantes and saying over the loud speaker ‘we are glad you are here’. They certainly didn’t rough up or do anything to the armed vigilantes.

These were also murders, preventable murders. This is what I pieced together from what I saw and heard. Some of it is in news stories already.

Today the police chief prefaced his remarks with “it wouldn’t have happened if they had obeyed curfew”. A major Wisconsin Republican says it wouldn’t have happened if the governor had called out the national guard. Thank heavens for Governor Evers. One of the lines from his statement said “I have said all along that although we must offer our empathy, equally important is our action.”  His remarks are here.

Not proven but looks to be true:

The 17 yr appears to have been at Trump’s Iowa rally in the front row. link
The baby-faced 17 yr old had an assault rifle when he cannot buy any firearm to my knowledge anywhere in this country.
Open carry at that age is not legal in Wisconsin. link to Kenosha article
He was a Blue Lives Matter poster on his social media (mentioned in news reports)
He was a Police Cadet. He wanted to be a cop. I saw several pictures that seem to prove this.

Questions not yet answered.

My question to you

Cops have different motivations for being cops but at this point, there’s no question there are bad cops. But they only exist because they are not vetted psychologically, no one says anything or encourages bad behavior, or leadership ignores such problems.

I remember when my kid while in high school said he wanted to be a cop. It was with the worst motivation of all – the need for power, the desire to legally control others. It is an honorable profession with some cops motivated to help others. My son needed something to strive for but I held my breath ’til he wandered away from that desire because he had no business being a cop with that attitude.

The only way this can possibly stop is we all speak up. If we all “just say no” to our representatives. Not by rioting or even protesting. People are dying. It’s time all of us realize that we have police problems in this country and it’s time to look at what we have and what we want to have and act on it.

There are bad and good cops.

We can fix this. We have to fix this. It starts with paying attention, listening and recognizing that this problem belongs to us all. It will take us all to fix it. It is not about politics. It is about saving lives of both citizens, no matter their race, and lives of cops who are underpaid to risk their lives.